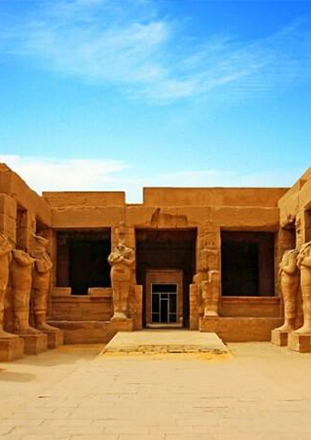 What is the ancient Egyptian religion?

Ancient Egyptian religion was a set of complex beliefs and customs. Ancient Egyptians believed in a lot of gods and goddesses who controlled the balance in society and human life. They worshipped the gods to please them and act in their favour.

Ancient Egyptian religion continued for a span of 3000 years and then gradually declined with the emergence of Christianity.

Who was the role of pharaoh?

The ruler in Egypt was called the pharaoh. He was considered to be half-human and half god. He was believed to be the connection between the human world and the world of gods.

It was the duty of pharaoh to keep the gods happy so that they sustained human life. If any destruction occurred the people blamed the pharaoh for upsetting the gods.

Pharaoh was hence the religious head and responsible for building temples and pleasing gods. They believed pharaoh would become a god after death. Hence his body was preserved after death and kept in a tomb with all the luxury. Gradually this led to the constructions of pyramids.

What did Egyptians mean by afterlife?

Egyptians believed in the afterlife. They believed that humans after death would live in the underworld after passing the test of life hall of truth. There the heart of the dead would be weighed against an ostrich feather and if it weighed lighter than the feather showed that the person had lived a worthy life and was eligible to live in the world of the dead. If not his soul would be eaten by the demon and he could not live again.

Hence, Egyptians preserved the dead bodies and offered it food and drinks which enabled the soul to live afterlife. They also believed in the possibility of the dead to come back to life. The bodies would be kept in tombs and taken well care of. This led to the creation of mummies.

Who were the major gods Egyptians had faith in?

Egyptians believed in many gods which numbered roughly around 2000 gods. Every local village had their own gods. There was an existence of state gods. Some gods were restricted to a  certain region while some were believed by all. The major gods’ everyone believed in were:

Usually, the gods were worshipped in pairs. For example, the Osiris and the isis, the Amun and the Ra etc.

Egyptians believed that gods and goddesses looked like human beings or a combination of human beings and animals and hence were worshipped in the same form.

What were the places of worship for Egyptians?

Egyptians believed that the temples were the only homes of gods on this planet. They created and worshipped physical forms of gods and goddesses to please them into granting boons and making their lives happier.

Priests and priestesses were appointed to take care of the temples and assist the devotees such that their prayers reached the gods. They looked into offerings and contributions made the enchantment of hymns etc. and brought people closer to god.

What is the contribution of Egyptian religion in art and architecture?

Egyptian temples are rich in art and architecture. Historians find these places mysterious as their structures stand ahead of time. In present times, these ancient Egyptian temples have become major tourist attractions and support the growth of the economy.

At secret temples, you will find amazing insights about architecture and mysteries of Egyptian temples which have passed the tests of time and stand great and grand even today.